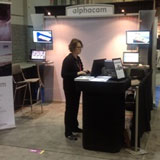 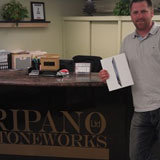 Both Park Industries and Northwood demonstrated the power of ALPHACAM Stone alongside their machines, on their booths at the recent Coverings Stone Show in Orlando.

And Park customer PT Tile Holdings believes the software would be invaluable to any stone fabricator using CNC technology. Slab Manager Bryan Fischer says: “We’ve used it to program our Titan and Fusion machines for over 18 months, and it readily breaks down our LT-55 files, sends them to Slabsmith and back to ALPHACAM, generating Fusion and Titan files in just over half an hour.”

Users say ALPHACAM’s use of VB Apps to streamline and simplify partner-specific machining functions – e.g. hybrid saw and waterjet table setup – are particularly useful. Northwood and Park have both written VB Add-ins that use ALPHACAM, helping to automate the programming of special functions available on their respective machines.

With the stone sector now representing around 30% of ALPHACAM’s new business in America, the software had its own booth at the show for the first time. Perry Boyett, ALPHACAM Sales Manager in the States, says: “A growing number of fabricators are now using ALPHACAM Stone to create CNC code for a variety of machines ranging from 2-axis bridge saws to 5-axis routers and combination machines.

“They manufacture products such as counter tops, shower pans, stone mantels, monuments, sinks, fountains, ornate carvings, statues, and stone arches. Many who came to our booth at the show were particularly interested in how ALPHACAM can program saw and waterjet combination machines, along with the ALPHACAM Art feature which allows them to easily convert 2D sketches, photographs, drawings and graphic designs into unique high quality 3D carvings and designs.”

Other ALPHACAM features which stone fabricators wanted more information about:

And there was an added bonus for one visitor to the ALPHACAM booth – Matt Laliberte (pictured left), of Ripano Stoneworks, won the ipad which ALPHACAM put up in a prize draw.